We were recently the Refreshments and Tournament HQ for the Northants Junior Open held by Daventry Squash Club on the same site as our club. The event was very successful and here is a letter from Mike who organised it.
Hi Janet,
Thanks very much… but I think that given the comments I have received, those of you in the Bowls Club were the stars of the day. A sample:
“Great tournament.. really well organised and thought those running the refreshments from the bowls club did a great job!” – Luke Harrington, father of Gilbert Harrington, boys under 13.
“Thanks for yesterday – seemed to go smoothly and the team down at the bowls club were tremendous” – Guy Mander, father of Harry Mander, boys under 15.
“Beautiful venue – Excellent courts – Very good hospitality. What more can a child & parent wish” – Ashish Chikermane, father of Vinayak Chikermane, boys under 15.
So… thank YOU. Absolutely brilliant day, biggest event I’ve run and I could never have done it without you and everyone else involved at the club. Please pass these comments on – looking forward immensely to more events!
Happy New Year
Mike.

Please let me know if you are available for either or both of theses games.

Names may be posted:

The club hosted a successful table top event, first of the winter season, on 28 November 2021, and what a show it was!

Thirteen tables skilfully dressed and ably staffed by local entrepreneurs and vendors made for a delightful afternoon of commerce, companionship and an opportunity to meet and greet friends old and new.

An open bar, coffee and tea and light snacks and a magical snowstorm topped off the day. Many grateful thanks to all involved! 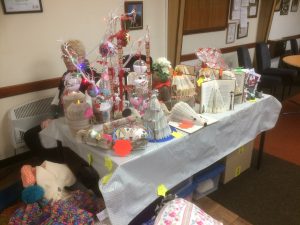 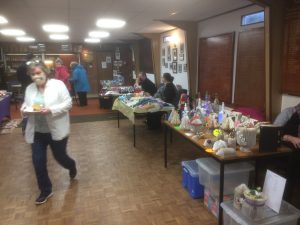 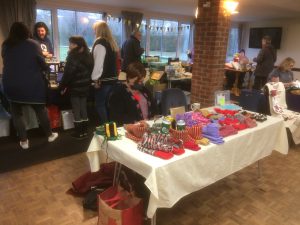 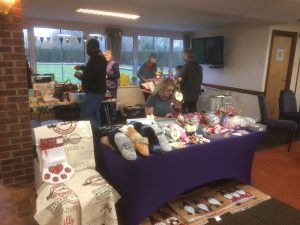 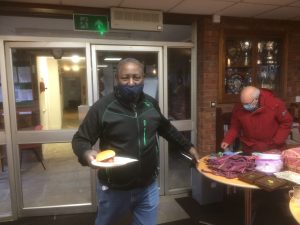 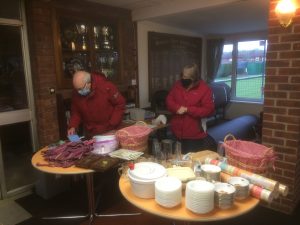 I am very happy to report that the Short Mat at DTBC will recommence on Wednesday 22nd September at 7.00 pm.

We look forward to bowling with existing members and any new ones who wish to try Short mat. 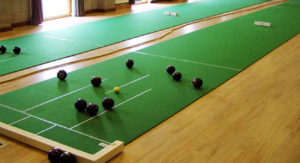 I collected Mike and the luggage from Meacham on Saturday… After a look round a couple of shops in Hunstanton,, we all headed home. A Clio with four adults and a bit of luggage, and my Scenic with Mike and the rest of the luggage and picnic stuff and wheelchair ,,, all home safely a little after two o’clock after a couple of stops..

no drama ‘s from the satnav… A bit different from the previous Saturday when taking them to Heacham… But we don’t talk about that anymore.!!!😂😂😂😂😂😂

Thank you to everyone who supported the Daventry and District Sports Club open day.  I hope everyone enjoyed their session and that we see you again soon.

The volunteers at all the clubs were fantastic and made the day special.

Today, the whole sports club is open from 11- 4. Come along and try bowls, squash, archery, athletics, table tennis or rugby and enjoy a cream tea in the bowling club.

Hope you enjoy the meat from John Thorne, Daventry market Tuesday and Friday.

The pizza was well received and the profits from the food and raffle help with club finances.

Looking forward to seeing you all next week.

Thanks to all the bowlers who took part in the match against the Grange, hopefully we can arrange home and away games next season.

The rain, thankfully, held off and we enjoyed a very pleasant afternoon.

Unfortunately we lost on all three rinks but there is only one direction from here.

Well done to everyone, including the men who served the tea and biscuits.

Finally, after all these weeks, I’ve won the meat raffle. Don’t know why I am so pleased, as I am a vegetarian, but it’s nice to win. Thank you John, for the meat, always good quality.

On Sunday 11th July 2021, 8 pairs of men arrived at Daventry Town B C to take part in the inaugural Men’s Pairs competition. After being greeted by Chairman Phillip Silk-Nielsen the competition got under way..

The players were split into 2 groups with 4 teams in each group. The competition was played in a round format with each team playing 3 matches, at the end of 2 rounds of matches, each group was poised for a close finish with 3 teams in each group still having a chance to progress to the final.

At the end of the round robin in Group 1 there were 3 teams on 4 points and the group was decided on Shot Difference with Craig Bowler and Adrian Mellows topping the group. In Group 2 the final round of matches left 1 team on 4 points with 2 other teams on 3 points and Chris Grey and Anthony Page topped the group.

Disability Bowls England would like to thank Daventry Town B C for hosting the event, with special mention to Janet Matthews who ensured that we had refreshments throughout the day, also to Duggie Mitchell and Andy Houghton who pushed the wheelchair for our player throughout the event. We are hosting this event at our club tomorrow Sunday 11 July starting at 10.30 a.m. Three players competing are currently part of the initial squad from which next year’s Commonwealth Games team will be selected. Come along and enjoy what should be a great day of competitive bowls.

The rain held off for most of the afternoon to enable us to play against the team from Kislingbury. Both sides welcomed one male bowler, to make up the numbers, they appeared to come away unscathed. Thank you to Jean, who arrived at the club expecting a roll up and ended up playing her first official match.

Each team ended with a loss, a draw and a win. Congratulations to Kislingbury who one by a greater margin.

We woke up to a wet and miserable day but the sun came out in time to mow the green and get everything set up for the afternoon.

The four Daventry Town teams played at – Roade, Kettering Lodge, Geddington and Rushden, with a very narrow win by Steve, Steve, Dave and Doug.  Well done to all those who participated I am sure everyone enjoyed another opportunity to get out and about and see fellow bowlers again,

We hosted players from Kislingbury, Whyte Melville, Irchester, Kingsthorpe, Wellingborough, Oundle, Geddington and Chapel Forest who all seemed to enjoy a relaxed, but competitive afternoon of bowls.  The after match chats were mostly centred on the upcoming England football match and we have been told not to mention the raffle – which was exceptionally well supported.  Special thanks to all those volunteers who helped either before, during or after the match, it would not have been so successful without you.

The afternoon reflected what sport is all about and it was great to see so many smiling faces.  Thank you to all who took part in the day, either by playing or organising, we are already looking forward to next year’s matches. 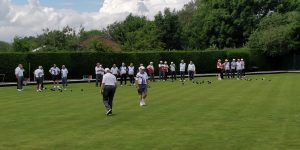 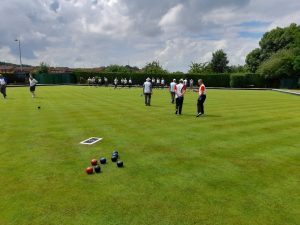 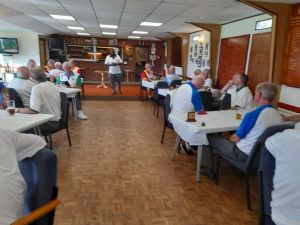 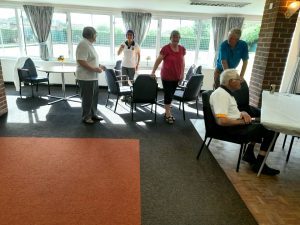 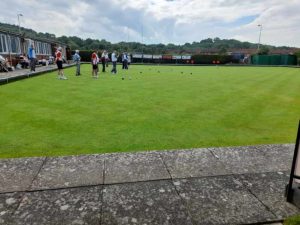 Well done to all the players who played on Saturday in sunny Byfield.

It was a closely contested match with each team winning on two rinks. Congratulations to Byfield, who won by a slightly bigger margin on their two.

Hopefully we’ll get our own back next time.

Thank you to all those who supported Thursday’s friendly against West End. We had a thoroughly enjoyable afternoon with perfect bowling conditions.  The post-match discussions took place while we relaxed with hot dogs and drinks.

Looking forward to our return match.

Once again, we had a fantastic turn out for an afternoon of bowling. Six matches for the club completions took place alongside the usual roll-ups. Thank you to all those who stayed on in the dropping temperatures to watch the match that went to a deciding end.

Congratulations to Andy H, who won this week’s meat raffle.

Looking forward to another good turnout this week.

We have donated some books to the Bowling Club which are for sale.  All money raised to go to club funds.

If anyone has any books they no longer require and are willing to donate them to the club please feel free to add them to the bookshelf in the clubhouse.

Thanks, once again, to all those who supported our club on this wet Friday night, both virtually and physically.  There was a fantastic response from our members to join in the short mat and chat with friends.

The meat raffle was won by Mike and Thelma, with Mike managing to pull his own ticket out!!! Congratulations to them and thanks to John for supplying the meat.

Looking forward to seeing everyone next week.